In the summer of 2017, then-KAUST master’s degree student Vasiliki Kordopati (M.S. ’17) enrolled in the “New Ventures and Product Innovation” elective course on the University’s campus.

Each year, students are asked to choose a technology from a portfolio of University inventions and develop a plan to commercialize and bring their product to market. For Kordopati, a student in computer engineering, this was an opportunity to push herself out of her comfort zone. She chose a laser-based illumination technology for use in horticulture and indoor farming.

After completing the class, Kordopati decided to turn her student project into a startup and enrolled in KAUST’s TAQADAM Accelerator program. She had never thought about entrepreneurship as a career path, but now, two years after the course, she is developing a pilot scale project in the KAUST Research and Technology Park and is in conversation with major farming suppliers.

“When I looked at my future, I didn’t know that startup founder would be part of it,” said Kordopati, now the CEO of Oaesis Lighting Systems. “This has been an incredible journey, from designing the technology all the way through to pitching around the world. I’m proud to be part of startup that has the potential to change the way we grow food in the future.” 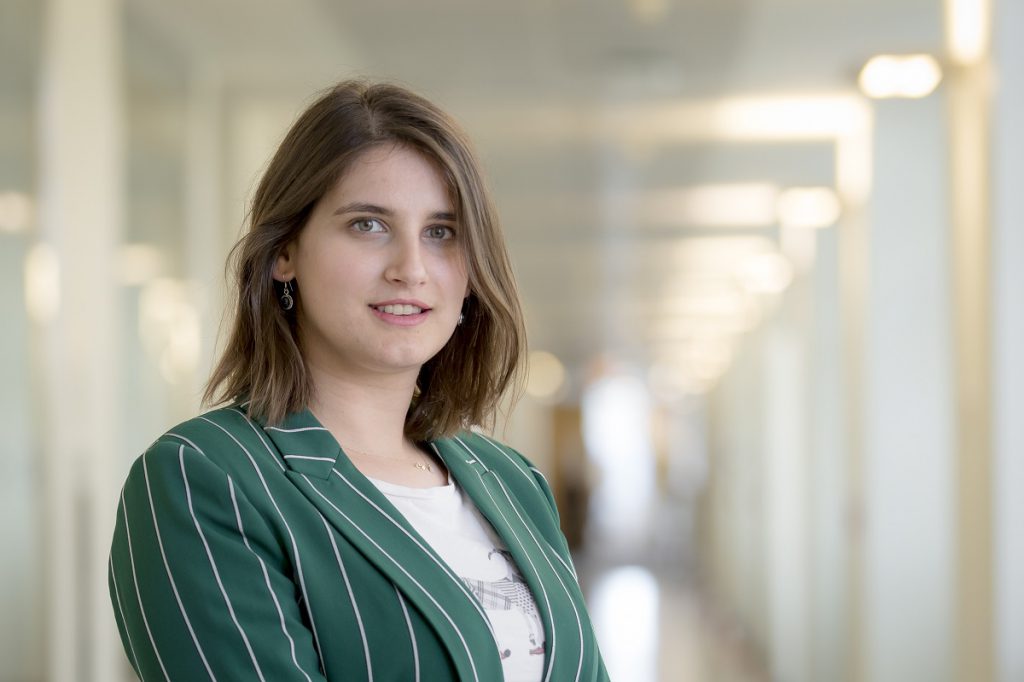 Universities play an important role in shaping entrepreneurs. When most people are asked to picture a startup founder, they envision a 20-year-old Mark Zuckerberg, who founded Facebook out of his Harvard dorm room. However, the real value of university entrepreneurship goes far beyond the billion dollar startup success story. The greatest impact universities have in facilitating entrepreneurship is by educating future leaders and founders like Kordopati.

KAUST is pioneering the next generation of deep technology entrepreneurs like Kordopati. As a purely science and technology-focused graduate university, KAUST furthers cutting-edge and transformative research across its four focus areas of food, water, energy and the environment. 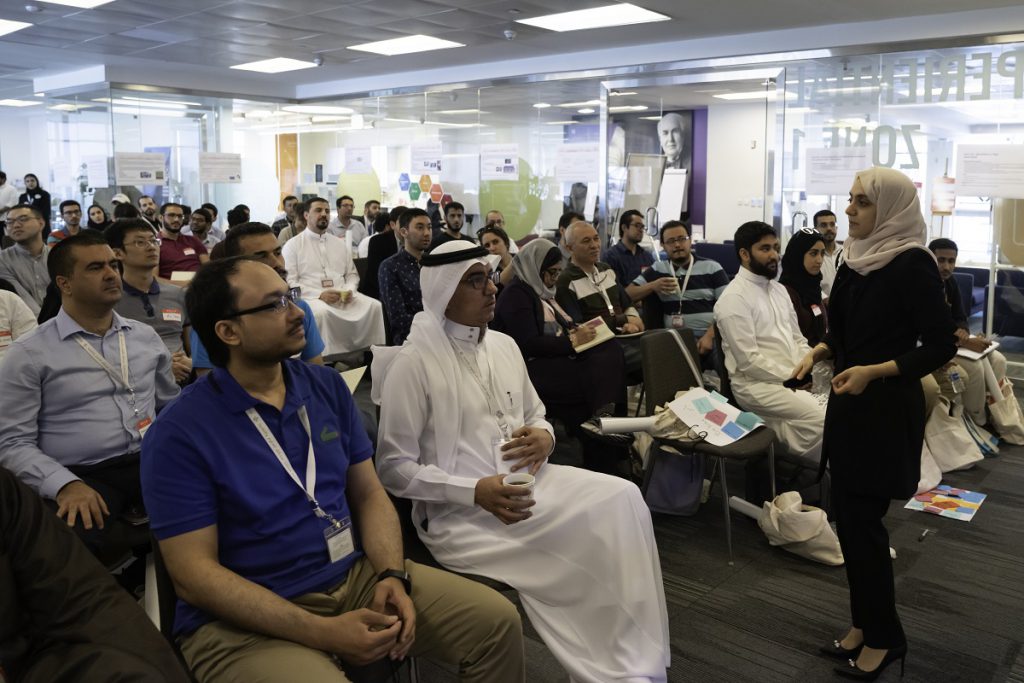 In 2011, the University took a bold stance in establishing an on campus entrepreneurship training center and a venture capital fund to accelerate startups and Saudi entrepreneurs.

Now, KAUST has established a fully integrated startup ecosystem, providing access to training, mentorship, funding, lab and prototyping space. In less than a decade, the University has trained over 400 entrepreneurs and funded 56 startups with seed or early-stage investment.

One of the KAUST Entrepreneurship Center’s flagship programs is the TAQADAM Startup Accelerator, a unique joint partnership between KAUST and the Saudi British Bank. Currently in its third cohort, 69 startups have been accelerated in the program, receiving grants of $20,000 zero equity funding, mentorship, lab space and access to critical industry, government and advisory connections. 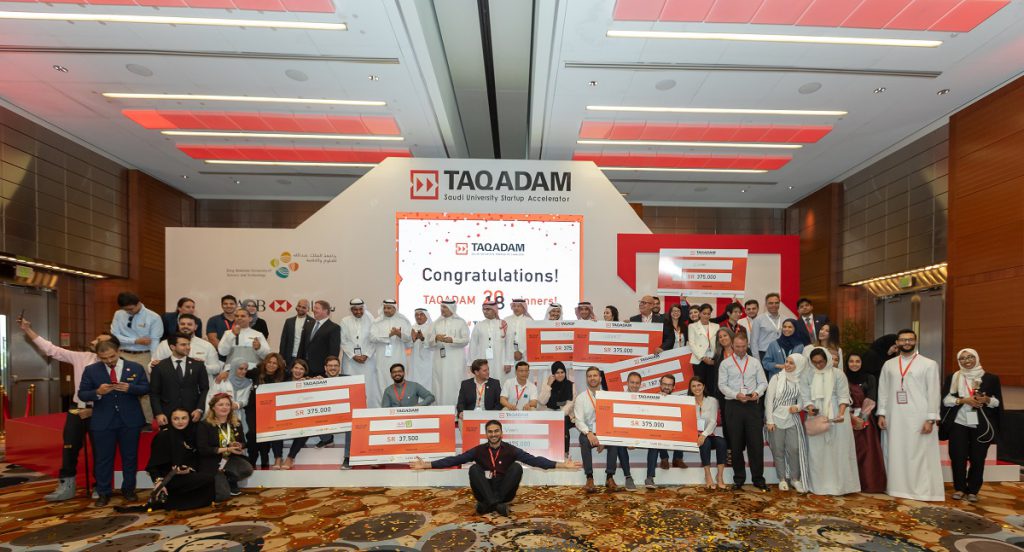 The University’s TAQADAM Startup Accelerator is a joint program between KAUST and the Saudi British Bank.

UnitX, a TAQADAM Accelerator graduate from 2018, is at the forefront of a new industry: making supercomputing accessible as a cloud-based service. For co-founders Kiran Narayanan, a KAUST mechanical engineering graduate (M.S., Ph.D. ’18); Ravi Samtaney, a KAUST Professor and dean; and Ankita Shree, the University was the perfect place to launch. The UnitX team tapped into the Kingdom’s unused on-site supercomputing power and combined it with the team’s engineering expertise to make big computing available to industries such as healthcare, government, insurance and retail. 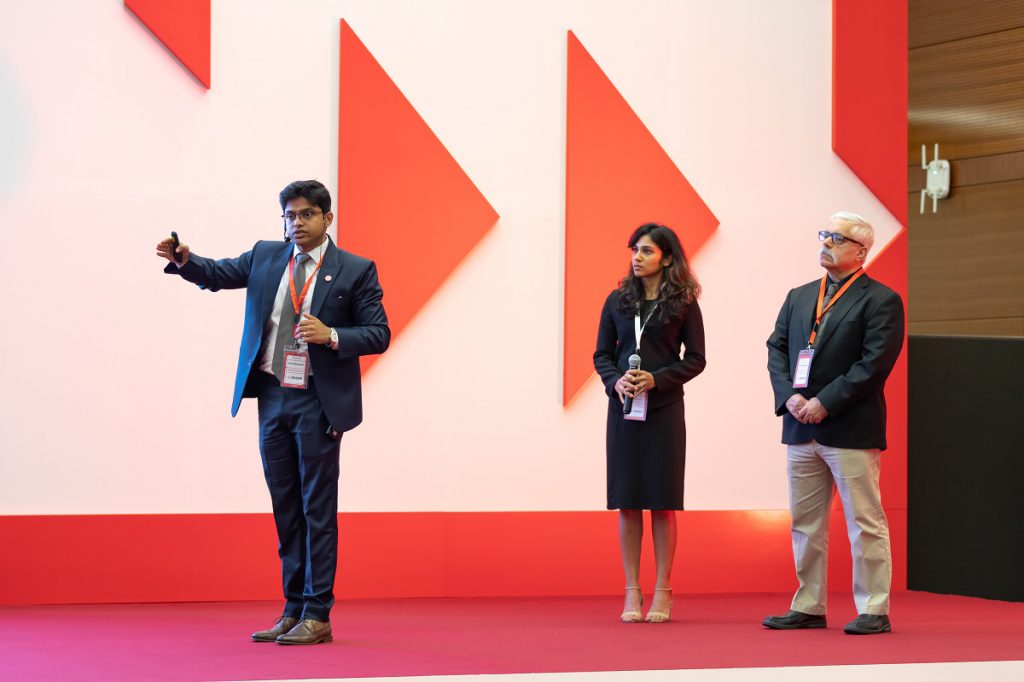 “We had an idea for a business based on years of professional experience,” explained Narayanan, now CEO of UnitX. “Our experience in [the] TAQADAM Accelerator and the collective connections of our KAUST mentors and advisors…enabled us to iterate to a successful business model, find a product-to-market fit and acquire multiple clients in [Saudi Arabia] who are looking to leverage the power of artificial intelligence and simulations to grow their businesses.” 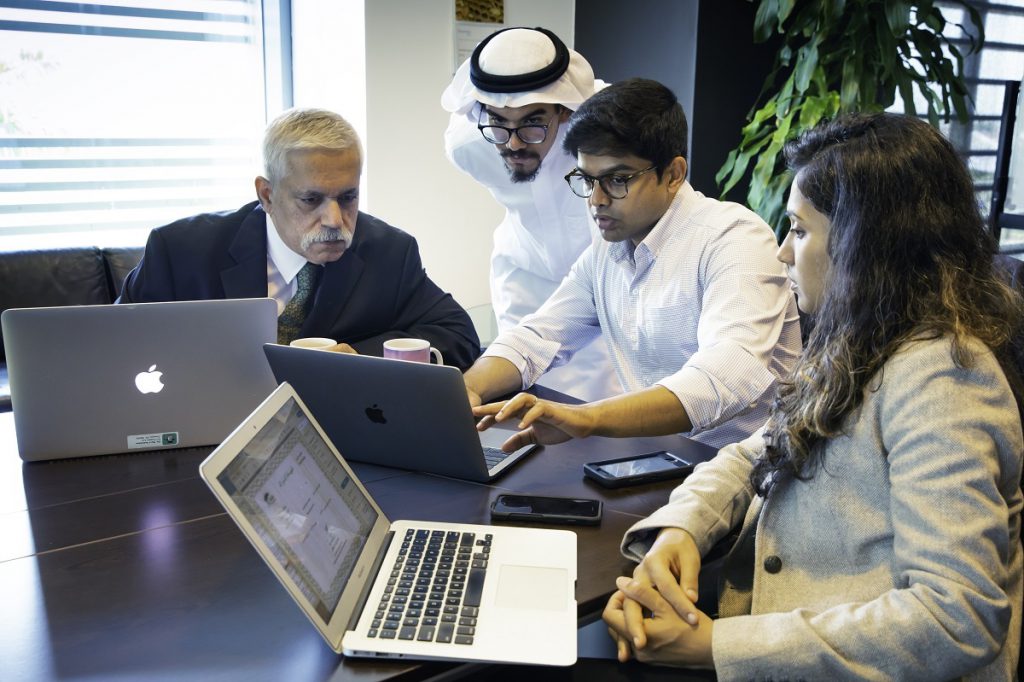 The UnitX team works together on the University’s campus. Photo by Ryan Yangyang.

The entrepreneurship momentum shows no signs of slowing down. KAUST President Tony Chan recently announced that the University will be introducing entrepreneurial education for all KAUST students. Expected to launch in 2020, the program will teach design thinking, commercialization and leadership, core skills that are applicable for students’ future employment. The University is also committed to funding new technology projects through the establishment of a translational research fund that is aimed at moving research from lab-scale proof-of-concept to commercial viability.

University entrepreneurship in the community

KAUST is committed to fostering and growing an entrepreneurial ecosystem in the Kingdom with a mission that extends beyond the walls of the University.

“We are accelerating entrepreneurship within the entire Kingdom by educating entrepreneurs to create new ventures with high impact,” explained Hattan Ahmed, head of KAUST’s Entrepreneurship Center. “To date, we have trained over 8,000 innovators in Saudi Arabia with partnerships from 18 Saudi universities and have graduated 206 startups from our programs.” 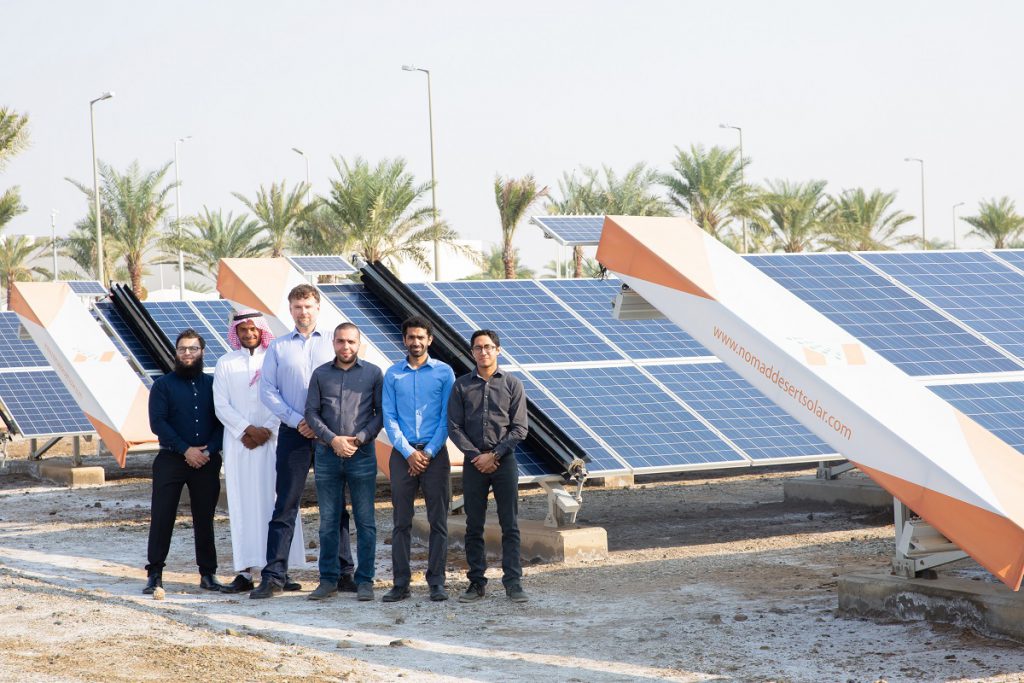 KAUST startup NOMADD secured a Series B investment from the Saudi construction company CEPCO in 2018.

The KAUST Innovation Fund is also seeing activity from corporates interested in investing in disruptive technologies. Last year, KAUST startup NOMADD, a photovoltaics robotic cleaning system, secured a Series B investment from the Saudi construction company CEPCO. In the first half of 2019, the Fund has co-invested $4 million with Saudi Aramco‘s Wa’ed venture capital arm into two Saudi-based startups.

For the nearly 60 percent of Saudi Arabia’s population who are under 30 years old, the future is bright. A determined network of government, university and private industry work actively together to advance entrepreneurship in the Kingdom. 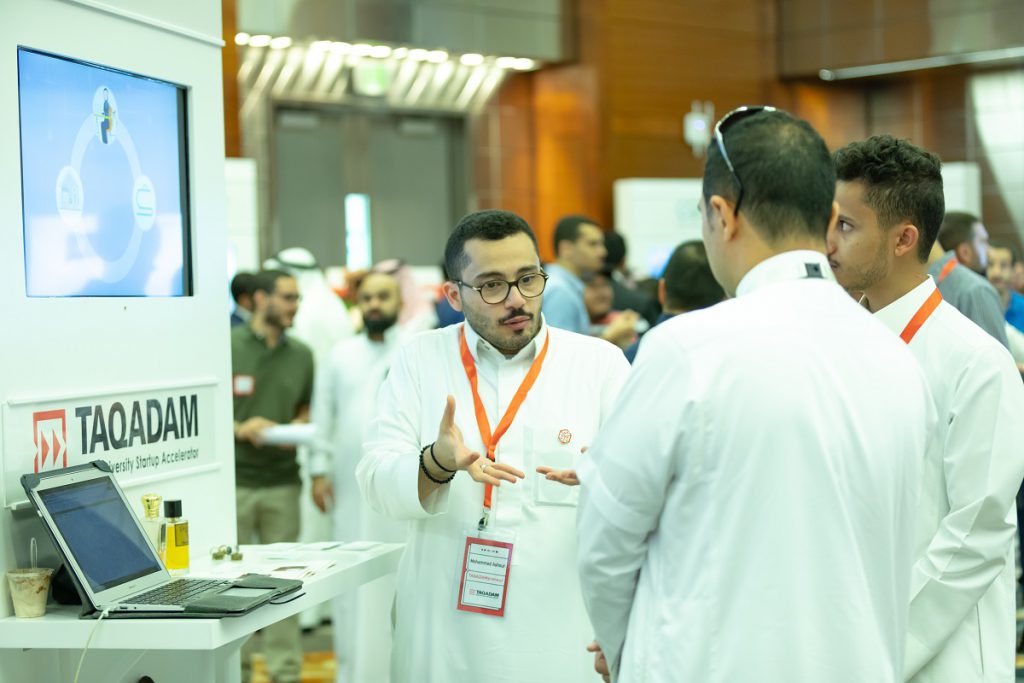 A young entrepreneur presents his innovative ideas during the University’s 2018 TAQADAM Accelerator program.

KAUST will increasingly play a key role in supporting the Kingdom’s deep technology startups while also acting as a landing pad for international startups looking to access the Saudi market. In the next 10 years, the University will be leading global research and investing in startups that solving shared global challenges in areas such as carbon capture, desalination and desert agriculture.

Through its partnerships with industry and government and its unique on campus entrepreneurial ecosystem, KAUST is committed to leading the next generation of innovators into the future.