Launching a startup can be tough and many aspiring entrepreneurs have questions about where to start. To shed some light on the startup journey, we’re sharing stories and insights from some of our TAQADAM Startup Accelerator founders and program mentors. If you’re interested in applying, click here to learn more about the program.

Business is booming in Saudi Arabia and the big international brands that move in bring with them the most up-to-date technology.

The smaller independent shops, on the other hand, still rely on traditional systems. But as competition intensifies and the government begins to impose new requirements and regulations, technological adoption has become a major issue of the day.

Sejam, a startup run by Ibrahim Aldlaigan and Bassam Alghamdi, aims to bring these smaller stores into the future.

The idea for Sejam came about because Saudi Arabia has over 30,000 micro-grocery stores – the corner groceries and mom-and-pop shops – that have yet to really enter the digital world.

“They’re part of our culture and people have been going in and out of them their entire lives but they’re kind of stuck in the past,” Aldlaigan says. “In 2020, there’s no need to run a business with a pen and paper.”

Many of the corner shops will soon be able to accept card payment but still rely on handwritten records. That means all their daily activities, from accounting to inventory management, are done manually.

As a result, profit margins aren’t being calculated properly and precise records aren’t being kept. The question was how to bring them into the future in the quickest way possible. Aldlaigan and Alghamdi broke the issue down and decided to create a solution for it.

“We think that nobody is focusing on this market because they think it’s going to be left behind, that they’ll start closing down slowly and that the big franchises will come in and take over,” according to Aldlaigan. “We don’t believe that’s going to happen – or not that quickly at least. Just from the customer behavior perspective, how the businesses are run, and how fragmented the industry is, we know that it can’t be replaced by these big businesses so easily. ”

Aldlaigan stresses that the tools required for the job need to be simple. The shop owners have many things on their plate and aren’t easily persuaded to learn a new and complex system.

“Our solution is a point-of-sale which is easy to use, easy to access and that is affordable,” he says. “We want to keep it really simple for the shop owners. The software should be something that doesn’t require much time to learn or set up.”

Another challenge facing the corner stores is the regulations that are now being imposed by the Saudi government. All businesses will have to pay VAT and maintain clear financial records.

Last year, all gas stations in Saudi Arabia started accepting credit card payments. But many of the corner stores are still lagging behind, and that makes the work of Sejam all the more important.

“What we do is provide a solution that digitizes your processes. Your sales will be recorded, you can track inventory so you know what is selling, as well as what isn’t selling,” Aldlaigan explains.

But Aldlaigan and Alghamdi want to go even further than that and help the store owners optimize and grow their businesses even more.

“Once we digitize their basic tasks, we can start digitizing other processes in the shop. We want to recommend prices, automate the delivery orders and give them analytics they can understand,” he says. “All of this generates data and with it they become much more useful to the ecosystem. That’s the goal.”

“There are existing solutions out there but a lot of them are based on legacy systems, such as Windows XP and Windows 95,” he explains. “International companies are definitely competition but we can’t let this stop us. Each market has its own unique characteristics, and we believe if we focus on our customers and on creating the best product, we can capture ours.”

“Our biggest advantage is our bottom-up approach,” he explains. “We are focused. Rather than simply supplying a generic solution, as many other companies do, we try listening to our customers and create features that try to meet their individual needs.”

“I’ve always liked science, technology and business. I studied mechanical engineering at Leicester University in the UK and then at KAUST where I also took all the entrepreneurial courses.” Aldlaigan recounts.

During the first week at KAUST, he met Alghamdi in the entrepreneurship center. They would both go on to take the same courses and develop business concepts in their respective groups.

“We’re both hyperactive, argumentative, and ask a lot of questions,” Alghamdi explains. “That’s why we’re a great match.”

Once the co-founders had agreed on a business concept, they entered the TAQADAM Accelerator to turn their idea into a reality.

“TAQADAM was awesome. All the other entrepreneurship courses give you a taste, which was great because it gets you hyped up,” Alghamdi exclaims. “But TAQADAM allowed us to take a deep dive. We’re creating something and we’re being challenged, and that was amazing.”

Aldlaigan and Alghamdi made it to the finals in TAQADAM, along with nine other startups. They had to pitch their idea in front of a board of investors, which was the big test for the co-founders.

“That’s when it became real. That’s why we do all this,” Aldlaigan says. “There’s something about it; when investors are asking you questions because they’re trying to see if they can help and if there’s a future for them to enter. Because at the end of the day, everyone has the same goal. We want to make money but more importantly, we want to make an impact.” 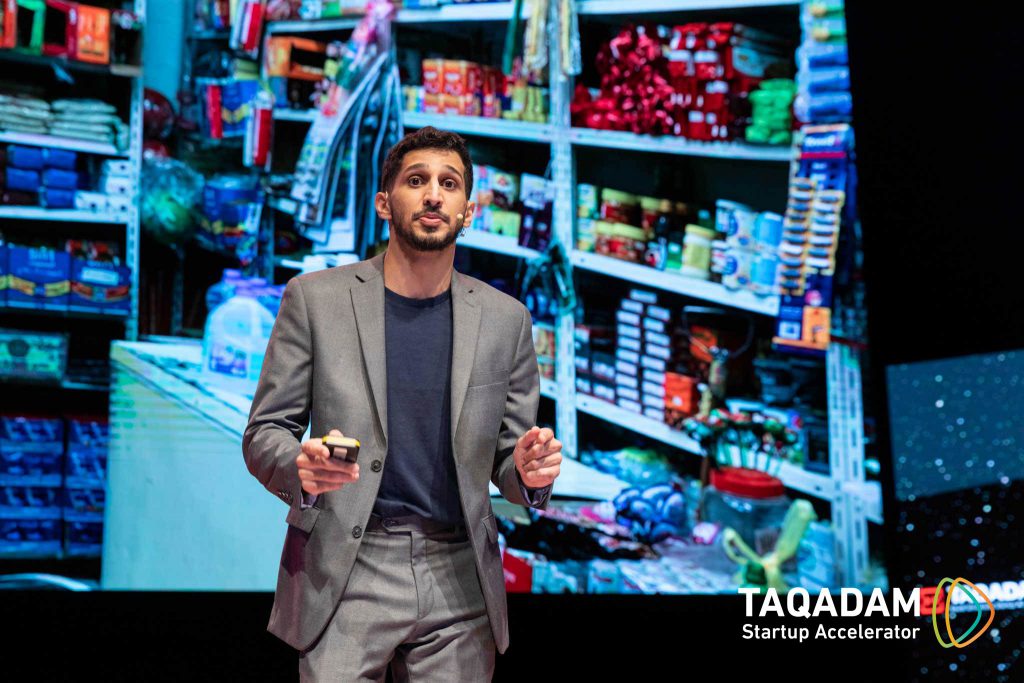 “TAQADAM was amazing and KAUST, in general, was great.“ Aldlaigan goes on. “But the best thing that came out of the TAQADAM Accelerator was exposure. The network, the people, the brand, and its credibility really helped us as a business.”

Since graduating, the two co-founders are hyper-focused on market penetration. They have already expanded their team, adding two more recruits with specialized skills. “Turki helped us a lot with his UX knowledge and Zamil brought years of experience in business and the tech industry.” Now, they have moved their premises to the capital where they hope to win over local businesses.

“After we left and moved to Riyadh, we entered the real world,” Aldlaigan explains. “You realize how much you’ve been helped by the university and now you need to face the investors, the customers, and the market on your own. So, we’ve grown a lot.”

Aldlaigan and Alghamdi have communicated with potential customers and have been in and out of their network of shops to make sure the product is something they’d like to use. Sejam will officially launch in 2020 and is aiming at securing a funding round to expand further.

“There is a problem that needs to be solved,” he concludes. “We believe the market is big enough, the opportunity is there, and we think our team is capable of making it happen.”