Red Sea Farms is uniquely positioned to serve the growing food security needs of the Middle East. A combination of irrigation water scarcity and hot, arid lands are barriers to the region’s ability to achieve agricultural self-sufficiency.

For Red Sea Farms co-founder and KAUST Professor of Plant Science Mark Tester, food security has always been central to his research.

“The Middle East is one of the most water scarce regions of the world. Here, we often rely on unsustainable sources of water for irrigation, such as groundwater, which is being rapidly depleted, or desalinated water,” explained Tester. “Desalinated water requires large amounts of energy to produce, which is costly—at least $1 for every cubic meter, and [this] has a high environmental impact.”

With its unique combination of engineering and plant science, Red Sea Farms has developed solutions to grow saltwater-tolerant crops in greenhouses cooled using saltwater. In their saltwater greenhouse, 80 to 90 percent of freshwater is substituted with saltwater, massively reducing both the water and carbon footprint of food production. The result is a system where both fresh water and energy requirements are reduced up to tenfold. 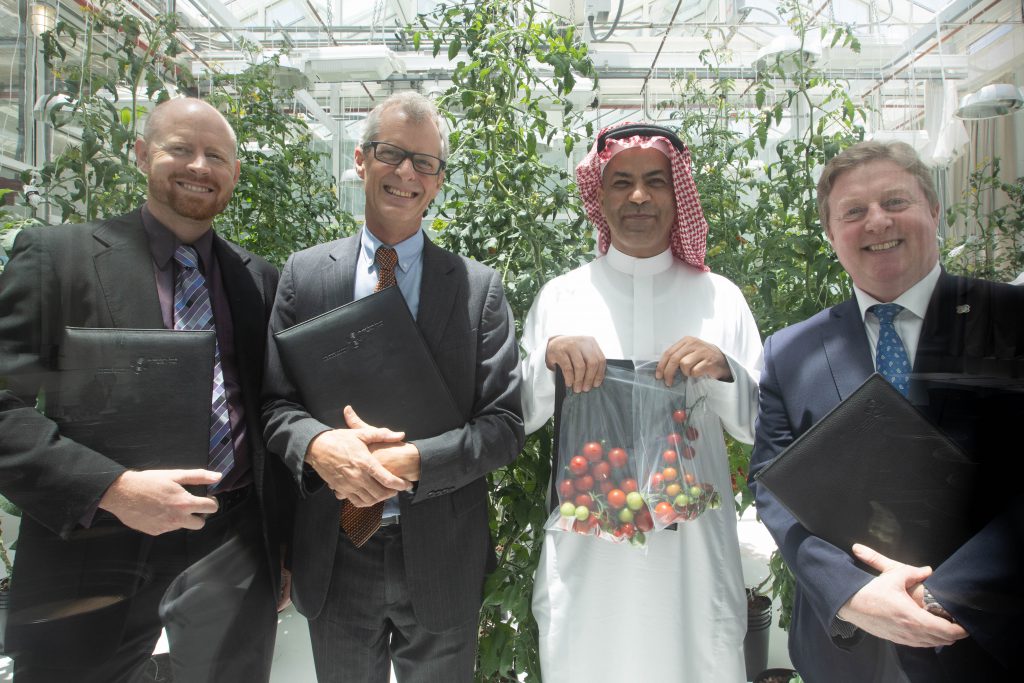 The seed investment will enable the company to build a 2,000 square meter saltwater greenhouse on the KAUST campus, and the company plans to produce 50 tons of tomatoes annually by 2020. Building on six years of research at KAUST, the tomatoes that will be grown have significantly higher salinity tolerance. The resulting crops can be grown using up to 30 percent diluted seawater, which will save further freshwater. This also makes the fruits exceptionally sweet, with higher levels of vitamins and antioxidants.

The new patent-pending system can be retrofitted to existing greenhouses, allowing for evaporative cooling with saltwater resources to save fresh water. The company is aiming to retrofit 5 percent of greenhouses in the Kingdom, offering a return on investment for farmers in less than two years.

“RPDC and KAUST share common interests in commercializing intellectual property and supporting high-tech startups in Saudi Arabia. This investment marks a shining example of the transition of KAUST academic research to commercial application, with the potential to revolutionize the future of food production in Saudi Arabia and the region,” stated Kevin Cullen, vice president of KAUST Innovation and Economic Development.

In the last five years, KAUST has taken a stand in contributing to the emerging venture ecosystem in Saudi Arabia by actively investing in technology startups and early stage companies. This is the first co-investment between KAUST Innovation Fund and RPDC to support high-tech entrepreneurs in the Kingdom.

“RPDC has a strong track record of bringing technology to market in Saudi Arabia, and [we] look forward to supporting Red Sea Farms as they scale,” said Abdulmohsen Almajnouni, RPDC CEO. “Red Sea Farms will use this investment to pilot their saltwater greenhouse cooling technology in the Kingdom. It will also enable them to scale-up their crop production of…saltwater tomatoes.”