For non-invasive screening and diagnosis

A non-invasive test for ovarian cancer (OC) detection measures methylation patterns of a set of biomarkers. The method is designed for screening, diagnosis, and prognosis of OC, and it relies on an assay of bodily fluids like serum, plasma, urine, or sputum. This patent-pending technology uses measures of aberrant DNA methylation gene patterns in combination, giving a greater specificity than measuring single gene patterns alone. Because sample analysis can occur in any clinical lab setting, the test has the potential to be performed in many healthcare settings and may be incorporated into national cancer screening programs.

The technology involves the use of four biomarkers (TFAP2A, E2F5, RN18S1, and CA125) that, in combination, increase the specificity of identification of OC patients. This has the potential to increase likelihood of diagnosis of OC in patients and potentially to screen and identify individuals with an increased risk of developing OC. 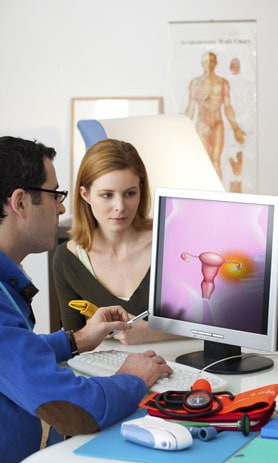 Using computational methods, the inventors have identified four novel biomarkers for OC that, in combination with existing biomarkers, greatly enhance the detection and diagnosis of OC in early and late stages. Based on a set of experimentally-validated OC-associated genes, the inventors identified biomarkers that in combination could identify ovarian tumors. Additionally, researchers identified TFAP2A, a transcription factor, as a new biomarker for early diagnosis of OC.

The combinations of biomarkers in this invention are unique for the diagnosis of OC, as it is based on the methylation profile in blood or other bodily fluids and not on protein expression. Additionally, it improves upon existing technology using only the CA125 biomarker, which alone could only classify 32 percent of cases as non-OC. The combination of three biomarkers (TFAP2A, E2F5, and CA125) could identify 75 percent of non-OC cases. Therefore, the combination of biomarkers increases the overall accuracy of detection of OC as well as non-OC cases.