Innovators at KAUST have developed a novel method for using small, non-intrusive sensors to measure critical aircraft flight parameters for unmanned aerial vehicles (UAVs). This technology dramatically improves UAV maneuverability and control, making it safer to fly low to the ground and in turbulent weather. The sensors measure airspeed and angle of attack (AOA), which must be controlled to avoid stalling and crashing. Conventional aircraft rely on pitot tubes and wind vanes for these fundamental measures, but their large size makes it difficult to adapt them for use on the emerging generation of small UAVs. The KAUST-developed technology uses microcantilevers to gather airflow information. The increased stall avoidance and control allows UAVs to operate under all weather conditions.

KAUST has developed a unique sensor system that significantly improves maneuverability for small UAVs, enabling them to fly low to the ground and in poor weather conditions. 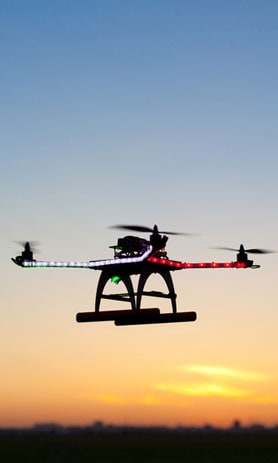 A miniature cantilever beam is attached to a UAV and its vibrations and air deflections are measured to gather information about the surrounding airflow. In the case of single sensor use, output is transmitted to the UAV autopilot system. For multiple sensors installed at various places on a UAV, transmissions go to a central computer that estimates the airflow profile and predicts its evolution over a time interval that is based on aircraft size. The airflow prediction is then routed to the UAV flight control system to increase aircraft performance by anticipating and responding to turbulence.

Air flow sensors used for larger UAVs are typically scaled-down counterparts of sensors used for commercial airplanes, namely pitot tubes for airspeed measures and wind vanes for AOA. While pitot tubes scale down somewhat easily, wind vanes do not, which makes them impractical for small aircraft. Therefore, most small­ to medium-sized UAVs are not equipped with AOA sensors. Because the stall risk is high for aircraft without these measures, UAV use is generally restricted to high-altitude flight and/or good weather conditions.

The KAUST-developed sensors increase maneuverability and control for UAVs and other small aircraft, enabling their use as low-altitude flood and traffic sensing platforms and for other surveillance purposes. The sensors are small and lightweight, resulting in less drag on the aircraft. Measurement times are faster than for conventional sensor readings, due to smaller cantilever inertia. Finally, the sensors integrate easily with other micro­scale sensing systems so they can be used on a large urban scale to collect and distribute real-time accurate data on current conditions.