KAUST has developed and fabricated a novel multilayer microfluidic device for the mass production of monodisperse single emulsions. The droplets produced from the device have a mean diameter ranging from 100 to 200 micrometers with the highest throughput rate ever reported for a single chip. The parallelization device is comprised of multiple generation layers with hundreds of flow-focusing microfluidic droplet generators arranged in a parallel polar array. The fabrication process is low­cost and allows to integrate dedicated distribution layers within the chip to eliminate parasitic losses and crosstalk between the generator. The design and fabrication methods are flexible, enabling better control of droplet diameter and throughput.

Possible applications for these microfluidic emulsions are found in industries like pharmaceutical, cosmetics, chemical and nanotechnology.

The novel multilayer microfluidic device enables the mass production of monodisperse single emulsions. Demonstrated to have the highest throughput for a single device, the device provides control of the droplet size and is completely scalable based on production requirements. The microfluidic system incorporates post-droplet generation processing that can modify the structure and composition in order to produce any kind of engineered particles. The device could be used in the production of highly monodisperse emulsions for a number of different industries. 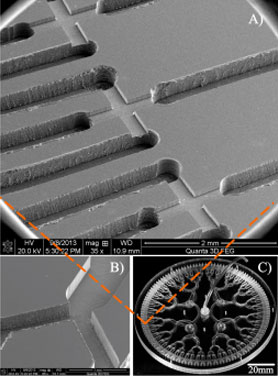 The design includes thin layers (approximately 1mm), which can keep the system compact. In addition, the distribution lines are produced on dedicated layers for each immiscible liquid and connect with the through holes feeding the generators. The inputs are placed axisymmetrically at the center of the device to produce an even loading of the liquids and to prevent the formation and trapping of air bubbles in the feed lines. This demonstrates the full integration of the distribution network within the chip.

Unlike batch processing, microfluidic reactors in the form of emulsions provide better control of reagents, mixing rate, residence time and environmental conditions for the processing of microparticles. In addition, the design could lead to a microfluidic solution that could increase the production of emulsions to an industrially relevant scale in a cost-effective manner.