This integrated system, monitoring roadway flooding and traffic flow, can be deployed on a large urban scale to provide real-time, highly accurate data on current conditions. Using a wireless sensor network, this innovative system generates real-time maps that display current and future conditions for roadway flooding and traffic flow. Storms and floods account for nearly 70% of the world’s natural disasters, affecting up to 200 million people per year with economic losses between $50 billion and $100 billion annually. The technology enables local and regional agencies to provide up-to-the-minute warnings and rapid response in the case of an emergency.

This technology integrates the monitoring of roadway flooding and traffic flow through a wireless sensor network. 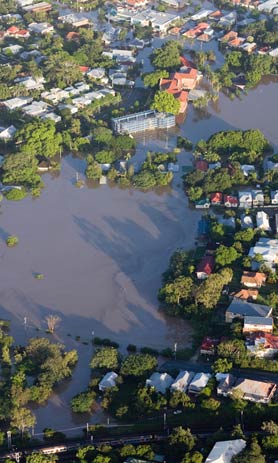 The system consists of two parts: a wireless sensor network and a backend server system. The wireless network is composed of wireless sensor boards connected to ultrasound transducers that point toward the ground. Positioned over the roadway, these sensor boards gather measurement data to assess (1) density, flow, and velocity of local traffic and (2) height of water in flooding situations. The backend server system processes the data relayed by the sensors to determine traffic conditions (based on traffic flow models and origin-destination models) and flood conditions (based on sewer models and meteorological conditions).

Unlike standard flood monitoring systems, which do not map flood propagation in cities and merely serve as an alert system, this system provides precise data on water levels in the roadways using non-contact based sensors. In the case of a flash flood, this street-level information is critical. The system also provides a continuous stream of real-time data on flood propagation and evolution, which enables authorities to track flood conditions and generate accurate impact maps. Furthermore, the technology is superior to satellite-based systems, which are image-based and can only track flooding after clouds have dissipated.

This technology has the added benefit of simultaneously tracking traffic condition. The network of sensors, combined with innovative inverse modeling and data assimilation techniques, can provide forecasts of traffic congestion with unprecedented accuracy.

KAUST has an issued patent 9,047,775  and several pending patents for this technology.