Innovators at KAUST have developed a system of deploying unmanned aerial vehicles (UAVs) to drop disposable microsensors to track the evolution of a flood in both urban and remote environments. The floating microsensors are implemented as low­-cost, system­-on-­package (SoP) platforms. Once dropped, they remain at fixed positions until they are dragged away by flood waters. The UAVs map the location of the transmitter­-equipped microsensors, and a centralized ground station uses these location maps in conjunction with flood models to accurately report floods and forecast future flooding events. This flood detection system is part of an integrated Smart City platform designed to improve public safety and municipal service efficiency.

This technology employs UAVs and novel microsensors to track and study flood evolution in both urban and remote environments. 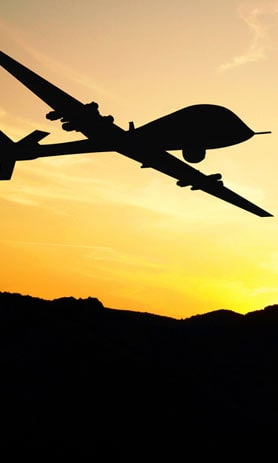 UAVs drop transmitter-­equipped microsensors on areas to be monitored. The UAVs are equipped with antennas that map the location of the sensors. Multiple UAVs can be used in conjunction to quickly map an area. Once dropped, the microsensors remain at fixed positions unless or until they are dragged away by flood waters or surface winds. To minimize the effect of surface winds during deployment, the microsensors are aerodynamically designed to fall as fast as possible for their weight.

A centralized ground station uses the sensor location maps to assemble a data-­based assessment of flooding conditions. In combination with flood models, the resulting real­-time and predictive maps can be used to predict future flooding events.

The floating microsensors are unique. Implemented in a low­-cost, SoP plat form, they feature a unique identification, controller circuit, transmitter, and antenna. Encased in a hermetically sealed, liquid crystal polymer (LCP) mate rial, these lightweight, disposable sensors offer reliable operation in dirty, debris-­filled floodwaters. Because of their low cost, they can be deployed on very wide areas, for example in desert areas around large cities.

UAVs are gaining acceptance as a method of quickly gathering geographic reconnaissance data. However, they typically rely on cameras for data collection, making them unsuitable for monitoring areas during low light or poor weather conditions, which are generally present during flooding events. The KAUST­-developed system is unique in that it augments the capabilities of camera­-equipped UAVs by adding telemetry data transmitted from multiple microsensors. Because the system relies on UAVs, it can be deployed quickly and easily. A set of UAVs filled with microsensors is small and lightweight enough to be carried by a cargo plane to remote locations, as needed.