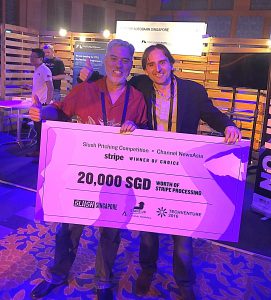 KAUST Startup SONATE: Top 6 at SLUSH Singapore!
SLUSH is a student-driven non-profit movement originating in Finland in 2008, that facilitates founder and investor meetings in an effort to to build a world-wide startup community. SLUSH Singapore was their first foray into Asia and was held on September 20, 2016.

From over 700 teams who applied from across Asia and the Pacific region, three KAUST startups were included in the final 45 teams to pitch at the event in Singapore. Two teams (SONATE and Sadeem) made it to the final 30. After three separate pitches in the main arena, SONATE made it to the final six at the competition, picking up a prize of $20,000.  Out of 700 applicants SONATE was the only materials science startup chosen for its scalable production of ceramic membranes for purification of biologics.

KAUST Startups Shine on the Global Stage
KAUST startups have recently been recognized on the global stage at several other events and competitions including: