Over the past 20 years, Dr. Kevin Cullen has thought a lot about the role of universities and technology transfer.

The first university and industry partnership program he ran was at Heriot-Wyatt University in Edinburgh. The companies Cullen worked with were thinking more innovatively – employing more university students, collaborating on more research projects, and developing new products. It was a classic economic development program, but the university didn’t make any money from it, instead it was covering costs with grants from the Scottish government.

His next role at Glasgow University was different. Asked to deliver a commercialization strategy, the focus was firmly fixed on delivering revenue from the university’s intellectual property (IP) portfolio.

At the time, there were some blockbuster IP success stories dominating university commercialization news: University of Florida and Gatorade, Florida State University and chemotherapy drug Taxol, NYU’s patent for autoimmune therapy Remicade, Stanford’s stake in the Google page rank patent. And later, the staggering $700 million in royalties from Northwestern’s drug Lyrica. At the time, Cullen remembers receiving a press release forwarded to him from a colleague at another university, the title read “Northwestern sells Lyrica rights for $700 Million.” Underneath, the university’s President had written, “Can we have one of these, please?”

There was much less focus on the partnerships and relationships that he had seen work so well.

At this point, Cullen was the head of the University of Glasgow’s Research & Enterprise department and a board member at AUTM (the Association of University Technology Managers). He started asking his colleagues from technology transfer offices around the world how much money they were making from IP. The responses were often embarrassed looks, or muffled answers about “strong pipelines” and “technology valuations.”

So just how much cash were university discoveries generating? The answer, it turned out, was not very much.

Former AUTM presidents Ashley Stevens and John Fraser have shown that, on average, university technology transfer programs will commercialize only 25% of their invention disclosures. Of these licenses, only 5% will ever generate revenue and only 0.5% will ever generate over $1 million.

It was logical then to wonder: if university revenue isn’t the key outcome of academic engagement with industry, then what is?

A New Framework for Academic Impact

For Cullen, it was clear that universities played an important role in delivering benefits to industry and society. It wasn’t about making money from IP, it was about maximizing the socio-economic impact universities were having. “Stop obsessing about IP,” Cullen said to his team at the University of Glasgow. “Let’s look at all of the ways that our researchers engage with companies and let’s start collecting data on them.”

Being able to measure this impact became an important driver for Cullen. Over the next decade he would go on to help design the metrics that were used to assess university funding in Scotland through Knowledge Transfer Grants, the UK with the Higher Education Innovation Funding (HEIF), internationally with AUTM and Praxisunico, and later in Australia at UNSW Innovations.

In the UK, Cullen supported David Sweeney at HEFCE (the Higher Education Funding Council for England) in developing the Impact Agenda. This led to the implementation of an impact assessment as part of the Research Excellence Framework (REF). As part of this new system, 20% of university block grant funding is based upon the demonstrated impact of the research.

In the REF framework, HEFCE define impact as, “an effect on, change or benefit to the economy, society, culture, public policy or services, health, the environment or quality of life, beyond academia.” This represented a significant shift in the traditional world of academic research, one in which highly cited journal papers were considered to be the most impactful. The new definition challenges researchers to ask, “so what” about the impact of their work and to think about what changes their research will help bring to the world.

In 2011, Cullen left the UK and joined UNSW Australia as the CEO of UNSW Innovations in Sydney where he introduced a new approach to innovation and industry engagement. He shifted the focus from IP and revenue to relationships and impact. His work at UNSW demonstrated that the profile for university and industry engagement was similar to that in the UK. IP revenue made up the smallest percentage of university revenue and research partnerships were the largest. This insight helped drive the delivery of major initiatives, including the TORCH engagement with China and the creation of the $83 million quantum computing company SQC.

While at UNSW Innovations, the Australian Department of Industry commissioned Cullen’s team to produce a report recommending appropriate impact metrics. Australia is currently undertaking its own pilot exercise around academic impact and has begun recognizing the critical importance of demonstrating the benefits of university research to the economy, society, and community and some of the metrics proposed were based on Cullen’s Knowledge Exchange model (below) – which describes the flow of knowledge from research to impact and economic development. Universities are generally able to track and measure the Knowledge Exchange channels, including, consultancy, training, facilities, research, IP, and company creation, making these a reasonable process for flow of knowledge. 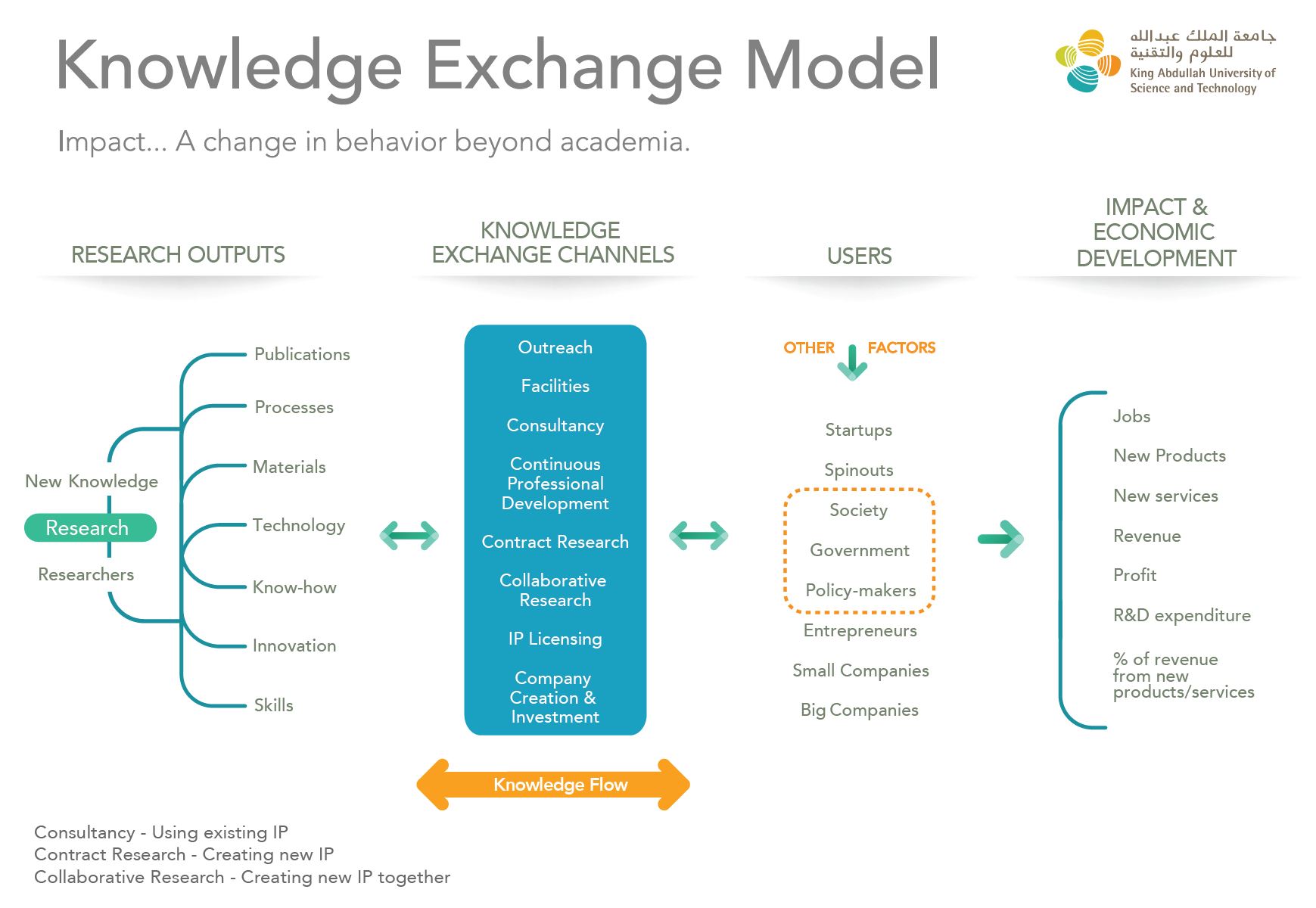 Increasing KAUST researcher engagement with industry, government and other users of academic knowledge is at the top of his list. He wants to make it easier for researchers to get their research put to use by removing the legal, financial, and administrative obstacles that typically come with commercialization.

He is a firm believer that there is more desire amongst the academic community to create impact than most people think. “I’ve never met a researcher who didn’t want their work to make a difference,” says Cullen. When asked what advice he has for researchers who want to create impact, he responds, “Stop thinking about commercializing your research. Instead, think about working with people who are interested in your research and who can use your research to make a difference and, in some cases, even change the world.”