AgriTech startup Red Sea Farms has found a new home at King Abdullah University of Science and Technology (KAUST) to advance their saltwater greenhouse technology. The new state-of-the-art 2,000-square-meter  saltwater greenhouse pilot facility, based at the KAUST Research & Technology Park (KRTP), is a product of the collaboration between KAUST and Research Products Development Company (RPDC), the national center for technology development and commercialization in Saudi Arabia, and support from the King Abdulaziz City for Science and Technology (KACST) Innovation Research Program.

Red Sea Farms, a KAUST startup that sustainably cultivates produce using saltwater technologies was established in early 2018 and is an example of academic research at KAUST progressing onwards to actual commercial application. The startup stands as the first co-investment between the KAUST Innovation Fund and RPDC aiming to combine two areas of research innovation: plant science and agricultural engineering. With the potential to revolutionize food production in Saudi Arabia and the region, KAUST continues to contribute to the advancing venture ecosystem in the Kingdom by actively investing in early-stage companies and technology startups like Red Sea Farms.

“Red Sea Farms is one of the startups KAUST is most proud of,” said Tony Chan, President of KAUST. “What started as research in the lab is now a product you can buy in Tamimi supermarket. This is very important for Saudi Arabia – it enables us to improve the use of our resources and reduce the stress on our limited water supplies. We cannot do this alone and I am very pleased to have our partners from RPDC. This co-investment reflects our alignment across both of our missions.”

Red Sea Farms has developed salt-tolerant, non-GMO cherry tomatoes through hybridization and grafting techniques. These tomatoes taste sweeter, have a higher concentration of Vitamin C, and longer shelf life. They are grown and developed in an engineered saltwater greenhouse which utilizes unique climate control and cooling techniques powered by saltwater and smart control systems. The saltwater greenhouse system can save 80 to 95 percent of freshwater consumption and use two to six times less energy than a normal mechanically cooled greenhouse. The Red Sea Farms system is designed to operate in harsh conditions with limited freshwater resources. This will empower communities to grow healthful food locally in places where it may not have been possible to do so before. It is this result that is the core mission of Red Sea Farms who aims to unlock the potential of saltwater in the future food supply. 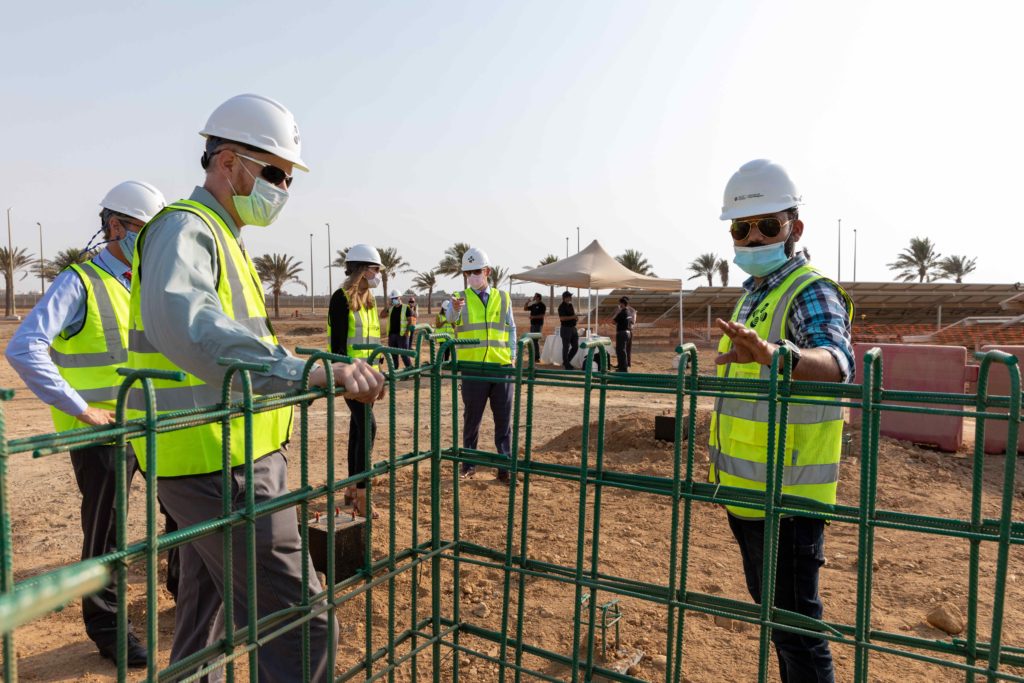 “Water is so important, and in Saudi Arabia, water is costly and energy-intensive,” said Mark Tester, Co-Founder, Red Sea Farms. “The ability to use saltwater in new ways is essential for sustainability. Red Sea Farms substitutes 90% of freshwater with saltwater in our greenhouse cooling technology developed by my co-founder, Ryan Lefers. We are also improving the salinity tolerance of plants. The environmental footprint of these tomatoes grown in a greenhouse might just be the lowest in the world – and they taste a lot better too.”

The pilot installation will be used as a reference for Red Sea Farms to launch further into the Saudi and international markets, delivering a sustainable food security solution for water-scarce regions to feed growing and urban populations. The greenhouse initiative is only the first of a number of plans Red Sea Farms is readying to implement with the on-going support of KAUST and other national partners such as RPDC.

“We have a lot more to do and we’re planning to adapt and use other technologies,” said Tester, “But we can only achieve this by working in partnership with KAUST and RPDC to help us develop and design these future technologies.”

RPDC drives growth of biotech and other technology areas in the region by acting as a national resource for the commercialization of innovative research as well as encouraging industry in developing new technologies, innovation and supporting emerging leaders. In 2019 Red Sea Farms raised $1.9M in seed funding from KAUST Innovation Fund and RPDC to scale from the lab to deliver a commercially viable product. RPDC support for this project has been enabled by the KACST Innovation Research Program, which aims to assist researchers in the Kingdom to transfer technological innovations into development and production.

“Our initial mandate was to do commercialization, which is what we are doing here at KAUST and RPDC,” said Abdulmohsen Almajnouni, CEO of RPDC. “We are proud to launch Red Sea Farms as our first product with KAUST. The significance of this project – and the ability to irrigate crops using seawater – is vital for Saudi Arabia to create new opportunities for agriculture and farming.”

Red Sea Farms was the first tenant in the KAUST Research & Technology Park’s Agro-hub, which is designated for R&D of all agricultural-related fields. This pilot facility will be the first of many planned sustainable agricultural systems by Red Sea Farms. KRTP provides an environment for technology-based businesses to access KAUST’s laboratories, faculty and student talent and a network of public spaces and facilities designed for creative collision and knowledge-sharing. The Park fosters links between KAUST and industry – as well as among the network of tenants, startups and service providers located there. The Park currently covers roughly 2.7 million square meters of space on KAUST’s campus.

Red Sea Farms is just one of many startups supported by KAUST who continue serving as an ideal platform for R&D collaboration. Always looking to the future, the University exists as a true partner to the Kingdom, advancing economic development and technological innovation by supporting pioneering technology and industry. KAUST’s future-oriented R&D collaborations are creating new products and services to secure the future and support the Kingdom’s Vision for 2030.