King Abdullah University of Science and Technology (KAUST) and the Saudi Authority for Industrial Cities and Technology Zones (MODON) signed a memorandum of understanding (MoU) to establish a high-level framework for collaboration between KAUST and MODON. The MoU, signed on December 12, 2019, aims to develop sustainability solutions and advance Saudi Arabia’s transition to a knowledge-based economy.

KAUST is a natural fit for the partnership as the University strives to continue to contributing to R&D, economic development and innovation in Saudi Arabia. The partnership between both parties underscores the importance of bringing research and industry together and KAUST is known for attracting industry to collaborate on education and research, employ graduates and develop new technology in the Kingdom.

“The relationship between KAUST and MODON is an excellent example of how universities and industrial partners can work together to solve challenges and improve existing processes and technology,” said Kevin Cullen, vice president for Innovation and Economic Development. “What started as a collaborative research project on air quality is growing into a partnership that extends across multiple research fields.” 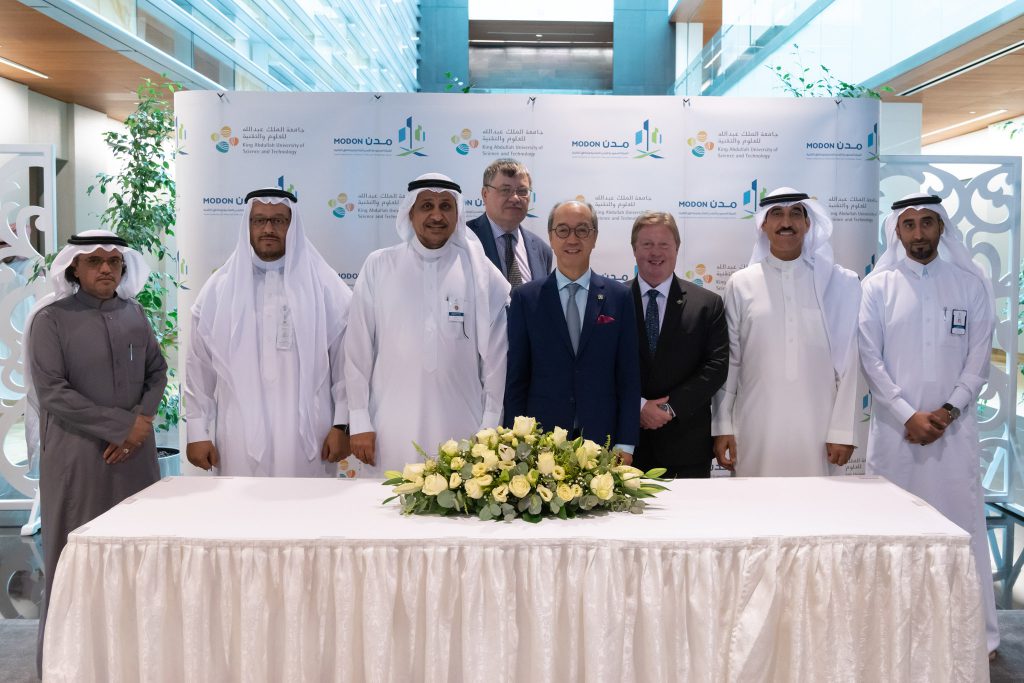 In 2018, Professor Georgiy Stenchikov, professor of earth science and engineering, and his team from the Atmospheric and Climate Modeling group at KAUST, collaborated with MODON who provided accurate data on air pollutants in Saudi Arabia. The project used an Air Quality Monitoring Station (AQMS) provided by MODON to develop a measurement model for dust, environmental pollutants and aerosols. The results, which were co-authored by both entities and are in-progress of being published, successfully proved the severe air pollution occurring in Jeddah, Riyadh and Dammam.

As an R&D partner for MODON’s range of companies around the Kingdom, KAUST will also be given an opportunity to reach out to potential companies within MODON sites for research. The MoU outlines intended common lines of action between the parties targeting areas of partnership, such as addressing the key issues and challenges faced by the manufacturing industry in Saudi Arabia and the world.

Bandar Al-Toaimi, Director of Marketing and Corporate Communications Department, official spokesman for MODON, emphasized that the Memorandum of Understanding obliges MODON and KAUST to support and implement significant research projects that contribute to creating a knowledge-based economy through scientific research, and to achieve discoveries that address the most important economic challenges and the core challenges facing the industrial sector, according to the objectives of Saudi Vision 2030 and the initiatives of MODON in the National Industrial Development & Logistics Program (NIDLP).

“The signing of the Memorandum of Understanding is consistent with MODON’s initiatives for digital transformation and adopting the technologies of the Industry 4.0 Revolution through the launch of the National Productivity Program to help factories reach the highest rates of production efficiency, indicating that the cooperation between MODON and KAUST includes developing and improving industrial performance and increasing productivity and efficiency in the industrial cities, as well as reducing environmental challenges through scientific research and discoveries,” he added.

The agreement outlines important knowledge sharing activities between the two parties, with MODON providing access to data which supports research, access to MODON’s sites and tenant factories, as well as setting up workshops in order to reach out to MODON tenants. KAUST will provide MODON access to KAUST’s courses, incubators and business accelerators as well as provide research support to MODON where applicable and arrange for MODON’s tenants to utilize KAUST services such as research, consulting, students, and core labs. MODON’s tenants will also have the opportunity to establish technical centers at the KAUST Research and Technology Park.

The MoU has formalized the working relationship between MODON and KAUST, committing to paper an alliance focusing on goals of innovation and advancement. Economic development is a key part of the KAUST mission, and working alongside MODON will advance the transfer of the University’s research into the private sector. KAUST was founded with industry collaboration in mind, working with companies and government to transfer knowledge and technologies created at the University and achieve public benefit and economic development.

About King Abdullah University of Science and Technology

Established in 2009, King Abdullah University of Science and Technology (KAUST) is a graduate research university devoted to finding solutions for some of the world’s most pressing scientific and technological challenges in the areas of food, water, energy and the environment. With 19 research areas related to these themes and state of the art labs, KAUST has created a collaborative and interdisciplinary problem-solving environment, which has resulted in over 11,000 published papers to date. With over 100 different nationalities living, working and studying on campus, KAUST has brought together the best minds and ideas from around the world with the goal of advancing science and technology through distinctive and collaborative research. KAUST is a catalyst for innovation, economic development and social prosperity in Saudi Arabia and the world. For additional information, visit: www.kaust.edu.sa

About The Saudi Authority for Industrial Cities and Technology Zones “MODON”

MODON is a government agency established in 2001 to develop, operate and maintain industrial cities and technology zones in partnership with the private sector. MODON has established industrial cities in various regions of the Kingdom and currently oversees 29 existing or under development cities located in several provinces and focuses in major cities like Riyadh, Jeddah and Dammam. MODON’s target is that during the coming five years, the number of industrial cities shall reach 40 industrial cities with developed industrial lands of not less than 160 million square meters. For more information, please see:  http://www.modon.gov.sa